""'Worlds colliding? Combining wills?' What is that supposed to mean?."
—Lee, reacting to the prophecy.

Lee Hatake is a young ninja created by Buddy Thompson and the main protagonist from the Brawl Legends series. He is available from the start in each of his video game appearances.

The Legacy of Lee HatakeEdit

"Lee" is one of Buddy Thompson's middle names, and "Hatake" is Japanese for "field".

Lee possesses spiky black hair and red eyes, and often wears a dark jacket, single-strap backpack for certain items, boot-like sandals, and blue pants. He only possesses a light muscle tone and has an average body type. His skin has a medium Caucasian tone, although he is of oriental descent.

Lee is often overconfident, wanting to prove his strength by rushing head-first into battle. He usually gets himself into trouble, yet proves to be capable of holding his own until someone more experienced arrives. Despite his overbearing attitude, Lee always wants to do the right thing and will toss aside his childish attitude when innocent lives are at stake. After the timeskip at the end of the first Brawl Legends game, Lee is shown to still be confident in himself, although he prefers to plan ahead instead of foolishly rushing himself. He has become more serious in nature, and will not hesitate to do whatever is necessary to protect those close to him.

Lee is a skilled hand-to-hand combatant and has trained in the ability to harness the elements of lightning, wind, and fire. With the Rings of Spirit and Chaos in tow, Lee is also given the power to create crystalline and ethereal weapons, as well as enhance his fire abilities with the power of napalm, making them nigh inextinguishable. Inherited from his grandfather, Lee possesses a unique trait that allows him to manipulate the minds of others. This ability is often used to create illusions, but can also be utilized to venture into another person's subconscious, allowing Lee to learn everything about his target, although it requires a large amount of concentration, making it dangerous to use in battle. When the illusions that Lee creates are enhanced with the power of his rings, he is able to inflict injuries upon his target without needing to make physical contact. Once his mind synchronizes with Inferno and Yoi's, his abilities are enhanced exponentially, allowing him to summon ethereal beings, summon much larger variations of his standard techniques, and quickly learn to utilize techniques of others (as indicated when he learned to use Rig's Ice Wolf technique, a skill that took months of practice to perfect, in a matter of hours). However, his ability to learn quickly is only effective if Lee possesses the aptitude to perform the technique, as he was unable to copy Nero's Jenova Blast. 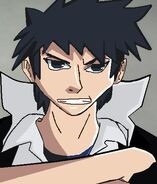 Older artwork of Lee in a high school costume

A newer design of Lee created from Rinmaru Games.

Add a photo to this gallery
Retrieved from "https://tlo.fandom.com/wiki/Lee_Hatake?oldid=18156"
Community content is available under CC-BY-SA unless otherwise noted.