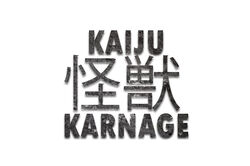 Kaiju Karnage, also known as Kaiju Karnage!!!, is a 3D fighting game developed and published by Toshiko Games. It centers around several Kaiju that rise up and attack the world.

Long ago in the Precambrian era, before the time of dinosaurs, enormous creatures the size of skyscrapers walked the barren Earth. In order to gain enough energy to sustain their massive bodies, they consumed a strange element known as Isotope-617. However, when the creatures finally exhausted this food supply and Isotope-617 was no more, they all died out...or so we thought. What happens when scientists unearth a single atom of Isotope-617?

The game is a 3D fighting game that can support 4-player online fighting. Players take control of one of 16 different Kaiju and fight eachother in one of ten different arenas that consist of areas and cities all over the world (as well as the moon. Environments are large and wide-open, allowing plenty of room for fighting. Environments contain elements that can be interacted with, such as buildings and structures that can be picked up and thrown at opponents.

Each Kaiju has a variety of devastating moves. Most combat is done at close-range, but each Kaiju has a ranged attack and a special ability (such as flight or regeneration). Some Kaiju are weak to certain attacks (such as fire). Players can perform combos and even grab and throw opponents. Each Kaiju has its own interesting backstory and powers.

Retrieved from "https://tlo.fandom.com/wiki/Kaiju_Karnage?oldid=17415"
Community content is available under CC-BY-SA unless otherwise noted.