Goop is a purple Gooptar created by Justin Wolfe and the main protagonist in the Goop series. Strangely, he is the only gooptar to not wear any sort of clothes whatsoever. Goop has changed quite a bit since his original incarnation. In the original draft of Goop's World, Goop was a small child avenging his village, which had been destroyed and ransacked by King Grex.

Goop's name is derived from the word goop, which is a synonym for slime. Slime is obvious amorphous, and Goop has the ability to shape-shift.

Goop is a male Gooptar and thus, his main characteristics are his duckbill, his oversized stubby hands, and the large crest on the back of his head. He has a bit of a potbelly, and unusual purple skin, which only occurs once every 1,000 years. He has a small tail, which is usually pointed upwards. His irises are purple, the same as his skin. His nostrils, although not visible, are on the underside of his bill. Strangely, he does not wear any clothing.

Goop is a very good-hearted Gooptar, although he doesn't really know how to show it. He's fairly cocky and rather hard-headed. Goop is shown to be very sarcastic, filling in the "Deadpan Snarker" trope. He's always one to throw an insult or wisecrack towards people who annoy him, such as King Grex or Norm. He isn't very book-smart at all; he's more street-smart.

Goop is also shown to not have much patience; he hates waiting for the right moment and prefers to charge into battle. Because of this, he rarely thinks ahead, preferring a "Punch First, Ask Questions Later" strategy to battle. However he has good intentions and respects his friends very much, especially Blossom, who he is in love with. He is courageous and headstrong, and is also eager and cocky in certain occasions.

He has an immutable sense of heroism, friendliness, and somewhat of a fiery personality. Additionally, Goop is much more impulsive and aggressive than his friend Bing and is willing to enter dangerous situations all alone. Goop will often attempt to quickly solve a problem with his actions.

Goop's physical strength and jumping prowess come from his heritage. He is a rare purple Gooptar, born only once every several hundred years, giving him amazing athletic powers. His main method of attacking is spinning around and hitting opponents with his tail. He can also perform a three-hit punch combo. He can also leap into the air and crash down. Goop's heritage also gives him a unique power: the ability to shape-shift. He can transform his body into a variety of forms. His powers are given to him by the Magic Opals, artifacts that contain the life force of the planet Gooptonia.

In Goop: Full Throttle, Goop can use the special ability of random opposing racer. 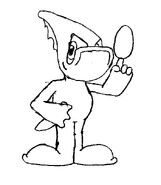 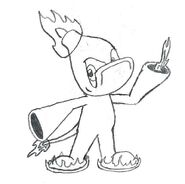 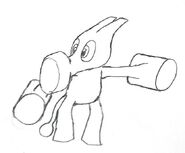 Goop's Hammer Form
Add a photo to this gallery
Retrieved from "https://tlo.fandom.com/wiki/Goop?oldid=17555"
Community content is available under CC-BY-SA unless otherwise noted.