Dr. Oktor Von Derwiff, more commonly known as Dr. Derwiff, is a villainous puppet-like scientist created by Justin Wolfe who appears as a boss and minor villain in Goop and Grex. He first appears during the Chateau de Derwiff level. This is his only major appearance. He is a mad scientist stitched together years ago from body parts of dead mad scientists by a mad scientist. He is voiced by Toshiko CEO Justin Wolfe.

Dr. Derwiff later makes a minor cameo as the villainous medical doctor of Varok Dorado's expedition camp in Tawnya: Force of Nature. How he got to be a part of Dorado's camp is a complete mystery, as his cameo appearance is never really explained. He only appears when Varok threatens to have Tawnya sent to "the doctor's office" as a method of torture.

Dr. Derwiff is notable in being one of two 'Goop villains to sing a musical number (the other being the Discobot). After he captures Goop and King Grex in Goop and Grex, Dr. Derwiff (with his various experiments as back-up singers) sings a song (reminiscent of a Motown group) called "In Stitches", which is about the horrible experiment Goop will be subjected to, culminating in him trying to dissect Goop.

The Legacy of Dr. DerwiffEdit

Dr. Derwiff is a green, humanoid, puppet-like character who is usually only seen from the waist up. From the waist down, it is clear that Dr. Derwiff has a pair of robotic leg with semicircular feet. His skin is a muddy green color and he appears to have stitching on his neck, forehead, and ears, signifying his reanimated nature. He has a long, pointed nose and an underbite. On his chin, he sports a thin gray goatee. Dr. Derwiff is always seen wearing a pair of metallic goggles, with his left eye and goggle lens being slightly smaller than the right. His head is tall and thin. He has two fin-shaped ears, two gray eyebrows, and a shock of white mad scientist hair on his head. On his neck are two bolts, similar to Frankenstein's Monster. Dr. Derwiff always wears a white lab coat, a black and red-striped tie, and a pair of pink rubber gloves.

Dr. Derwiff is quite unlike the typical mad scientist. He is cowardly and a bit of a sissy, letting out whimpers and high-pitched, girly screams whenever he is frightened. He is also even afraid and startled by the lightning that strikes when he laughs maniacally. Dr. Derwiff speaks in a high, effeminate voice, showing good manners to everyone, even his prisoners. He is also a bit of a klutz, sometimes bumping into things/falling over things/being injured in general. Because of this, he is a very affably evil villain. He also speaks in a vague Russian-esque accent.

Despite his ludicrous nature, Dr. Derwiff takes his science very seriously, showing no qualms about sucking out Goop's brain just to perform an experiment that would likely never work. He is very determined to carry out the procedure, chasing Goop and King around the Chateau de Derwiff when they escape.

Similar to Bing, Dr. Derwiff has an amazing intellect, as well as the ability to construct various machines, such as a floating chair that contains long legs and a turret. 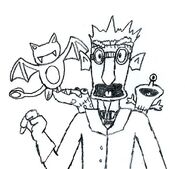 Derwiff with Batapult and some experiments
Add a photo to this gallery
Retrieved from "https://tlo.fandom.com/wiki/Dr._Derwiff?oldid=17016"
Community content is available under CC-BY-SA unless otherwise noted.