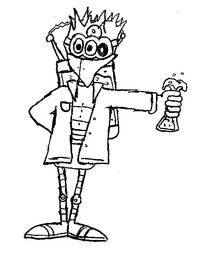 An eccentric medical officer from the mountainous land of Deifendoogen, Heinz Johnson, known to his fellow soldiers as Doc, is the very definition of the word "quack". His knowledge of the basic rules of science is questionable and his medical practices are "hazardous", to say the least. However, despite his quirks, Doc is a surprisingly capable medic. He has been outfitted with a variety of devices built by Pappy, such as a teleportation watch, an acid-spraying gun nozzle, and a nanobot-filled healing device.

Doc's main weakness is his low health and damage potential. He only has 100 health points, the lowest of all Shockbots, and his weapon, while decently effective, eats through ammunition like crazy. He also lacks a real long-range attack method, meaning players will have to be able to effectively teleport to an enemy and take them out from close-range.

Doc is voiced by Justin Wolfe.

"Raised by a family of swimsuit models in the mountainous country of Deifendoogen, Doc (real name Heinz Johnson) was raised to join the family business. After an unfortunate incident involving a speedo, Doc decided to attend Bronzhilda's Medical Academy in Northern Deifendoogen. Despite his frequent acid-related college pranks and wild surgery parties, he graduated with a major in Slimeology (and a minor in Ballet) and joined the Shockbot Corps. Soon after, he married his childhood sweetheart, a fern named Copernicus."

Gives Flu Cannon a splash damage effect, allowing it to hit multiple Minions at once

Retrieved from "https://tlo.fandom.com/wiki/Doc?oldid=16639"
Community content is available under CC-BY-SA unless otherwise noted.