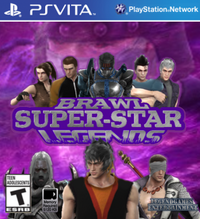 Warriors spanning several worlds are brought together by a mysterious force. Soon, they begin to meet each other and go about regular activities such as an upcoming fighting tournament taking place in another universe. Unknown to the warriors, however, is the same force that brought them together is slowly destroying their worlds, and adding their abilities to his own.

In Brawl Super-Star Legends, up to four players fight on screen using characters from LegendGames Entertainment's original series. Stages in the game are inspired by two different series for each stage. The stages will interact with the player by changing the landscape or posing a threat. Items will spawn on stages for the characters to use, and the combat is similar to Sony Computer Entertainment's PlayStation All-Stars Battle Royale, in which certain Supers will result in instant KO's.

The game would have a rival system wherein the rivals interact within a storyline, as opposed to a ladder arcade. Each character has a Minion that appears as a cheerleader in their intros, outros, and during successful KO's. The Minions can be assigned to any character, regardless of whether they are controlled by AI or players.

There are 26 playable characters in Brawl Super-Star Legends.

These Minions can only be unlocked whenever a specific character levels up.

These Minions can be unlocked via other methods, such as leveling up multiple characters to a certain rank, using specific characters on certain stages, or as DLC (downloadable content).

Retrieved from "https://tlo.fandom.com/wiki/Brawl_Super-Star_Legends?oldid=16457"
Community content is available under CC-BY-SA unless otherwise noted.