Anomaly-001 (code name: The Unknown) is a Code Black anomaly that has been contained by the Department of Paranormal Anomalies. 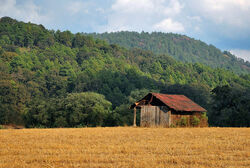 The door that serves as the entrance to the shack has been replaced by a steel door that locks via a fail-secure, inner electro-magnet-based locking system. At this time, no personnel regardless of security clearance are to be admitted inside the shack.

Anomaly Description: Anomaly-001 is an ordinary-looking oak door located within a shack in a field in Alabama. At first glance, the door appears weathered; its surface is covered in scratches and peeled paint. Over the years that the DPA has been aware of Anomaly-001, the wood has also begun to rot and turn black. The door itself is standard height for an external door in America; almost 2.07 meters in height. The anomaly appears to be connected to the outer wall of the shack; however, investigation of the outside of the shack reveals no sign of a second doorway. Experimentation has discovered that the anomaly radiates 5 PBq of radiation, but aside from this, the door itself is unremarkable.

Opening Anomaly-001 reveals an endless, black, "void-like" dimension. This void appears to go on indefinitely and is much larger than the dimensions of the shack would allow. This void dimension does not appear to have a "floor"; stepping out into the void simply results in the subject falling down into the void. Research has proven that the void does have an oxygen content slightly higher than what is found at Earth's sea level altitudes.

Experiment Log 3/12/1958: During our experiment, a tape recorder containing several hours worth of tape was left running overnight on a small table within the shack, precisely 2 meters from Anomaly-001. From 10:00 PM-11:30 PM, no unusual noises were recorded. At precisely 11:45 PM, several deep, guttural whispers which could only be described as "inhuman" were recorded. The whispers themselves were unintelligible.

Anomaly-001 does not actually appear in-game. It is only mentioned in its Database File.

Retrieved from "https://tlo.fandom.com/wiki/Anomaly-001?oldid=16122"
Community content is available under CC-BY-SA unless otherwise noted.